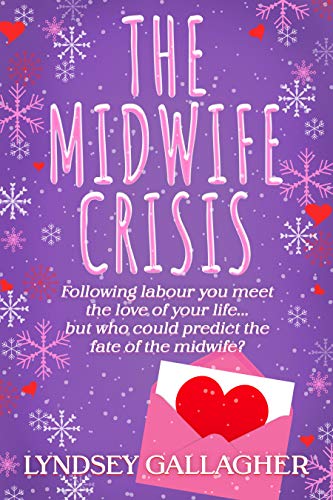 Following Labour you meet the love of you’re life…but who could predict the fate of the midwife?

As a midwife, nothing shocks Orla Broder. She has seen it all; from fainting to forceps , epidurals to epiphanies, tears to triumphs. Miles from her Galway hometown, immersed in the madness and magic of an Edinburgh labour ward, not to mention the wild hospital nights out, Orla had never given much thought to her own Happily Ever after… That is until an unexpected financial contractor arrives at the hospital ruffling feathers, including her own.

To complicate matters further, Orla’s previously estranged father re-enters her life with some heart-stopping news that will change Orla’s outlook on life forever. Cool, calm and collected Orla finds herself at the centre of her very own MidWIFE Crisis.

Will the labour of love ever win out?

Wife, Mammy and Dental Hygienist by day, Lyndsey writes at any opportunity she gets. Her debut novel ‘The Seven Year Itch’ was inspired by the weekend she met her husband.

She currently lives in the West of Ireland overlooking the Atlantic Ocean. She enjoys long walks, deep talks and the ocassional G & T! Lyndsey is an avid reader and an unashamed romantic, forever in search of the next Happily Ever After!

Her second novel ‘The Midwife Crisis’ is now available to purchase on Amazon and she is also currently working on a much requested sequel to ‘The Seven Year Itch’.

There are no reviews yet.

Be the first to review “The Midwife Crisis” Cancel reply

This website uses cookies to improve your experience while you navigate through the website. Out of these cookies, the cookies that are categoriaed as necessary are stored on your browser as they are essential for the working of basic functionalities of the website. We also use third-party cookies that help us analyze and understand how you use this website. These cookies will be stored in your browser only with your consent. You also have the option to opt-out of these cookies. But opting out of some of these cookies may have an effect on your browsing experience.
Necessary Always Enabled
Necessary cookies are absolutely essential for the website to function properly. This category only includes cookies that ensures basic functionalities and security features of the website. These cookies do not store any personal information.
Non-necessary
Any cookies that may not be particularly necessary for the website to function and is used specifically to collect user personal data via analytics, ads, other embedded contents are termed as non-necessary cookies. It is mandatory to procure user consent prior to running these cookies on your website.
SAVE & ACCEPT
Select your currency
€ Euro
$ United States (US) dollar
£ Pound sterling