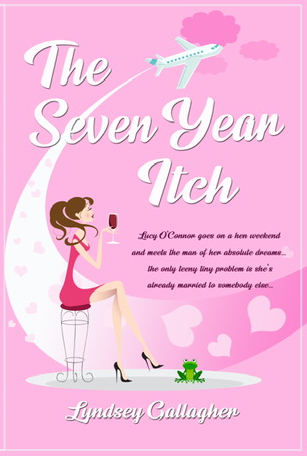 Twenty-seven-year-old Lucy O’Connor has been asked to be her future sister-in-law’s bridesmaid despite the fact they don’t see eye to eye. The last thing she expected was to fall in love with a complete stranger at the hen weekend. Which wouldn’t be a problem apart from the teeny tiny fact that she’s already married to somebody else…

Is it a case of the Seven-Year-Itch or could it be the real deal? Lucy needs to decide if she is going to leave the security of her stale marriage in order to find out if the grass is indeed greener on the other side, or whether it’s worth having one more go at watering her own garden.

Could this party-loving, city girl really leave the country she loves for a farmer from the West of Ireland?

Is there such a thing as fate?

Is John Kelly all that he seems?

Wife, Mammy and Dental Hygienist by day, Lyndsey writes at any opportunity she gets. Her debut novel ‘The Seven Year Itch’ was inspired by the weekend she met her husband.

She currently lives in the West of Ireland overlooking the Atlantic Ocean. She enjoys long walks, deep talks and the ocassional G & T! Lyndsey is an avid reader and an unashamed romantic, forever in search of the next Happily Ever After!

Her second novel ‘The Midwife Crisis’ is now available to purchase on Amazon and she is also currently working on a much requested sequel to ‘The Seven Year Itch’.

There are no reviews yet.

Be the first to review “The Seven Year Itch” Cancel reply

This website uses cookies to improve your experience while you navigate through the website. Out of these cookies, the cookies that are categoriaed as necessary are stored on your browser as they are essential for the working of basic functionalities of the website. We also use third-party cookies that help us analyze and understand how you use this website. These cookies will be stored in your browser only with your consent. You also have the option to opt-out of these cookies. But opting out of some of these cookies may have an effect on your browsing experience.
Necessary Always Enabled
Necessary cookies are absolutely essential for the website to function properly. This category only includes cookies that ensures basic functionalities and security features of the website. These cookies do not store any personal information.
Non-necessary
Any cookies that may not be particularly necessary for the website to function and is used specifically to collect user personal data via analytics, ads, other embedded contents are termed as non-necessary cookies. It is mandatory to procure user consent prior to running these cookies on your website.
SAVE & ACCEPT
Select your currency
€ Euro
$ United States (US) dollar
£ Pound sterling